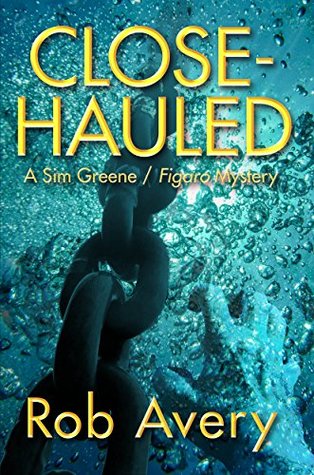 Where to buy: Amazon UK

Riding the currents as it crosses the deep blue ocean, a school of silver fish darting and hiding within it, a flotsam of blurb drifts:

“Sim Greene has twenty years in the US Navy as a Master-at-Arms. He lives aboard his sailboat, ‘Figaro’, surfs when he likes, and loves a woman who is way out of his league. Assigned to investigate the death of a retired Navy Lieutenant, Sim finds himself tangled in something much larger and far darker than a simple murder.

Soon, the things he loves and the people he cares about are all at risk. One false move and the spider web he’s stumbled into will ruin his life. Or end it.”

(My thanks to Rob for contacting me and sending me his book to review. And I’m jolly glad he did :)).

Sim Greene is a cool dude. He is so cool that he probably sweats ice cubes. You could  probably use him as a portable fridge in emergencies, strapping food items to him and whatnot. Or stand him in the corner of a particularly hot room. He lives a pretty idyllic life too; living in Southern California, in the sun and on the sea, aboard his little boat ‘Figaro’. Surfing with the dolphins, spear fishing for his dinner and enjoying the company of his friends. Sounds marvellous, doesn’t it? Well, it was, and would have still been, if he hadn’t discovered a body, wrapped in chains and clearly murdered, underneath his boat.

Sim is a Master-At-Arms (Military Policeman) in the US Navy who is tasked by his base Commander to investigate the death of our victim, one Barry St James – a retired Naval Lieutenant – and retrieve some Very Important papers in the process. Captain Overson expressly tells Sim that this is to be done on the quiet, the down low, on the hush hush, strictly need to know and all that. Of course, he fails to do this and before long too many people know about the death, and Sim pisses off his CO quite spectacularly, his chances at joining NCIS (the Naval Criminal Investigative Service, for those of you who, like me, don’t watch the telly box much), seriously keel hauled. Despite this setback, and being the determined chap that he is, Sim enlists his old chum, Al, to help him out and the two start to make inroads into the case. Sadly for them the bodies start to rack up and Sim finds himself the prime suspect in their murders. Both Sim and Al are very resourceful in their investigations; their naval training and experience helping greatly. Al can be quite the mercenary, very handy at times, whilst Sim manages to improvise where needed – a particularly ingenious use of a gun, a Pepsi bottle and some duct tape springs to mind.

Along with Sim, Rob has created a group of very believable characters in Close Hauled. I felt that they spoke and interacted naturally without any of the over the top language, cliches and histrionics that can often be found in this type of story. Being a policeman himself, Sim reacts calmly and believably to the regular police’s investigation into him, even though it is clearly obvious he really has nothing to do with the deaths. Sim, Al, Ashley, Monica, Reid and Jessica (whose lost sunglasses kick off the whole thing), are a believable group of friends who like nothing more than to hang out on their boats, catch fish, cook fish and then eat said fish. They’re all likeable folks and are all very well written, with some we get to know better than others.

Close Hauled isn’t what I would call an action packed book; like the ocean itself it can be relatively calm and peaceful but then a large swell rises and shit kicks off before the calm is restored and the next swell approaches. This book is also very atmospheric, with Rob’s love of the sea and sailing coming through loud and clear; you can taste the salt coming off of the pages, almost hear the splash of the water, the gulls in the air (fortunately not their aerial bombardments…). There were some passages that I found hard to follow as they contained lots of nautical or sea faring terminology, but at no point at all did it take me out of the story or force me to skip pages. I suggested to Rob that some sort of glossary may be in order and he actually agreed. I feel that it may make his books more accessible to land lubbers like myself without losing any of the detail he so clearly loves.

Close Hauled is a bloody good book. I can honestly say that I enjoyed every sea sprayed, salty page of it. Rob Avery has crafted a wholly believable tale of murder, smuggling and double crossing all set against the backdrop of the Pacific Ocean. There are two more books in this series – Broad Reach and the forthcoming Dead Downwind – and I’m really looking forward to reading both of them and to see where Sim Greene ends up next.