Sitting at your desk you hear a strange sound from the other side of the door leading into your office. To your alarm a piece of folded paper is slowly pushed under it. You get up quickly and take the sheet of paper as you hear someone run away on the other side. Pulling the door open there is no one there. You open the paper and there, in letters cut out from magazines and newspapers, is a blurb….

“PI Varg Veum receives a surprise visit in his office from a woman who introduces herself as his half-sister, and she has a job for him. Her god-daughter, a nineteen-year-old trainee nurse from Haugesund, moved from her bedsit in Bergen two weeks ago. Since then no one has heard anything from her. She didn’t leave an address. She doesn’t answer her phone. And the police refuse to take her case seriously. Veum’s investigation uncovers a series of carefully covered-up crimes and pent-up hatreds, and the trail leads to a gang of extreme bikers and to a shadowy group, whose dark actions are hidden by the anonymity of the Internet. And then things get personal… Chilling, shocking and exceptionally gripping, Big Sister reaffirms Gunnar Staalesen as one of the world’s foremost thriller writers.”

Gunnar Staalesen has been writing about his private detective, Varg Veum, since 1977. In that time, over 40 years now, he has appeared in over 16 novels, two short story compilations and several films. After reading Big Sister, the question I am now asking myself is, how the bloody hell have I missed all this? Like, totes seriously? Until the email from Anne Cater plopped into my inbox I had never even heard of Gunnar or Varg Veum. Not even after reading oodles of Scandi Noir in the last couple of years have I even glanced upon his name or heard whispers of his adventures upon the net we call inter.

Frankly, this is scandalous. You see, Big Sister is a stupendously good book and Varg Veum is a magnificent creation indeed.

In case you are wondering, yes I have taken myself outside, given myself a damn good drubbing and made a vow to hunt out and read the rest of any translated books in the back catalogue. I was suitably admonished and embrrassed with myself.

So, that’s out of the way then.

Seriously….40 years! Ok, I was only 6 when the first book came out, so there’s that, but that’s no excuse for the ensuing 41 years ignorance, imo.

The very first Varg Veum book (also, what a brilliant name – Varg Veum. I’ve no idea how you say it properly in Norwegian, but it sounds fab either way), was published, as previously mentioned, in 1977 and looked like this: 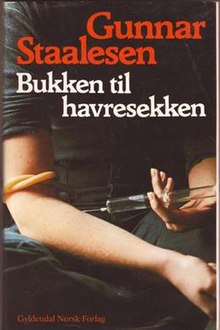 Cheerful little number, innit? Apparently, the title translates to “The Buck To The Sack Of Oats”. Uh huh, I know right? I have no idea either what on earth that means, but from that cover I’m guessing it isn’t about a male deer and a bag of porridge. Or maybe it was. Maybe the deer, sneaking into this dude’s kitchen as deer are wont to do, ran off with the porridge one day and this gentleman on the cover was so upset, nay bereft, that he turned to the only other thing in the cupboard that morning for his breakfast; his junkie brother’s secret heroin stash (which he foolishly kept in a bottle marked ‘Orange Juice – NOT heroin). Only it wasn’t so secret, was it? No, clearly not. Now look at him; he’s living in squalor and his life is ruined. Also, what is it with that syringe? It’s bloody HUGE! How much heroin does he need? He must’ve been really hungry and pissed at that deer for buggering off with his porridge. That is the only explanation.

Anyway, this review isn’t about the Buck Who Fucked Off With The Oats, it’s about Big Sister, the 650th Varg Veum novel.

Actually, I have no idea where this falls in the series order. Usually I am one for reading a series in order. I know not everyone feels this way, but I enjoy getting to know a character, or characters, from the start. It’s also interesting to see how they change, and how the author’s style may change, over the course of a series, particularly if it is as long running as this one. So when Anne emailed with this book I was a little hesitant to get on board. But then I thought, you love Scandi Noir, you beardy tit, AND it is published by Orenda Books, and when have they ever let you down? So, once again, I took myself outside to my personal, and very private, drubbing spot, and, suitably drubbed, I leapt on board.

And thank goodness to jolly gracious I did because Big Sister is truly excellent. I won’t bore you with the plot again – you can read it up there in the blurb – but as an introduction to our hero, private detective Varg Veum I found it to be a great jumping on point. There are many times that the first person narrative alludes to Varg’s previous cases and adventures, but there are no spoilers at all and I don’t even know if they are from previous books or just there as background. But I know one thing; It’ll be fun to find out 😉

What about Mr Veum, then? Well, his name, Varg, means ‘wolf’ in Norwegian. He’s older than your average character in this type of book; he’s 61 at the time of the book’s setting (2003).  He used to be a child welfare officer before becoming a private detective. He is a seriously persistent, dogged and cool gentleman. He seems to have very little fear, something that is great for asking difficult questions from difficult people, but it is also something that gets him into an awful lot of trouble an awful lot of the time. Even in the face of [spoiler] he doesn’t really appear to be fazed. Even when it looks like [spoiler] is imminent and there is no way out, he remains stoic and calm – and he still questions his quarry who is in the same position as he is. He is a very persistent chap indeed. I also love his sense of humour; it’s very dry and droll, as in this little exchange between Varg and  Sølvi Hegge, his sort of girlfriend:

‘I’ve been worried, don’t you understand that? Only a few days ago you were on your back staring at the ceiling in Haukeland Hospital.’‘

‘You have no idea what nice ceilings they have.’

Sølvi is a character who is undoubtedly one from previous books, but I didn’t feel that I was missing out on part of their relationship really. Gunnar helpfully recaps it here: “… A couple of years ago she (Sølvi) had been involved in a case I was working on. Her husband had been killed and I managed to reveal the guilty party. We found the right wavelength and, afterwards bed – it had happened faster than I was used to, not that I was particularly upset.” There’s that dry humour again 🙂

As mentioned in the blurb, Varg discovers that he has an older half sister, one that, after the death of his mother, he was aware of but never had the time to get in contact with. Also during his investigation another family member drops another potential bombshell to Varg regarding his [spoiler]. This news threatens to derail him somewhat from the task at hand, finding his sister’s missing goddaughter Emma, but through his dogged persistence he manages to remain on track for the best part. It is a great side plot though and one that deepens his character and leaves me wondering where it will lead to in future books.

The hunt for Emma starts off as a relatively simple missing persons case, but soon descends into something darker, much darker. The police are reluctant to get involved as they believe that she has just opted to disappear, but Norma believes differently and, as the case develops, so does Varg. As he delves deeper into the case he discovers links to to an unsolved rape case from the 70’s and a connection to a sinister type of website. I won’t say anything further here, but this book takes us to some very dark places indeed.

Big Sister is a fantastic read indeed. It serves as a brilliant entry point into the world of his private detective Varg Veum, and I can only imagine is another stellar entry into this long running series for those lucky buggers who have already discovered him. It weaves a dark tale of betrayal, outlaw biker gangs, sexual violence and suicide. It is a gripping read from start to finish as our hero Varg runs into dead end after dead end as he tries to discover what has happened to his half sister’s goddaughter Emma. His style of writing is relaxed and easy (no doubt that this is also in part to Don Bartlett‘s translation), and is sprinkled with dark humour and great, realistic and superbly realised characters. This may be my first Gunnar Staalesen, and Varg Veum, book, but, as Freddie Mercury as my witness, it most definitely will not be my last.

My biggest thanks to Anne Cater and Karen Sullivan at Orenda Books for my copy of Big Sister and for allowing me on to the blog tour. My even biggesterer thanks to Gunnar himself for writing and creating Varg Veum in the first place 🙂

Check out the rest of the blog tour and see what else you can discover about this great book.

Gunnar Staalesen was born in Bergen, Norway in 1947. He made his debut at the age of 22 with Seasons of Innocence and in 1977 he published the first book in the Varg Veum series. He is the author of over 20 titles, which have been published in 24 countries and sold over five million copies. Twelve film adaptations of his Varg Veum crime novels have appeared since 2007, starring the popular Norwegian actor Trond Epsen Seim, and a further series is being filmed now. Staalesen, who has won three Golden Pistols (including the Prize of Honour) and the Petrona Award, and been shortlisted for the CWA Dagger, lives in Bergen with his wife.